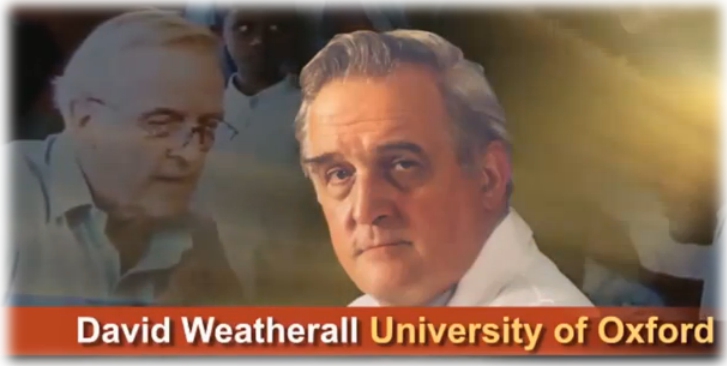 Each year 300,000 to 500,000 babies are born with severe forms of hemoglobin disorders worldwide. It is estimated that 7% of the world’s population are carriers of the genes that may cause these diseases. While originally most common in warm climates, extensive population migration has resulted in hemoglobinopathies becoming a worldwide public health problem, including the United States and particularly California.

The exponential increase in hemoglobin disorders (“hemoglobinopathies” including sickle cell disease and thalassemia) led the World Health Organization (WHO) to address this problem globally with efforts to promote and support research, increase awareness, and provide support for prevention and management of these disorders. Dr. Weatherall has been leading efforts with the World Health Organization and has initiated an international program of developed and developing countries to share resources in addressing the medical, ethical, social and economic issues of this public health crisis. These partnerships have developed specialized programs in areas largely ignored by the international health community and governments. Dr. Weatherall is leading an effort to expand commitments from countries like the United States in areas of greatest need. For instance, in many regions of smaller countries, the cost of transfusion alone for these patients account for greater than 7% of total health expenditures. For over 15 years, Children's Hospital Oakland has participated with Dr. Weatherall's worldwide efforts.

A medical pioneer, Sir David Weatherall transformed the clinical treatment and genetic understanding of thalassemia throughout the last 50 years. He first encountered the inherited blood disorder during his British military service in Singapore – thalassemia is most common in people of Asian, the Mediterranean, and the Middle Eastern descent – and went on to complete a fellowship at Johns Hopkins University. In 1987, Dr. Weatherall was knighted for his scientific accomplishments and in 1989, he founded the Institute of Molecular Medicine at Oxford, later renamed the Weatherall Institute of Molecular Medicine. At Oxford, he held the most distinguished chair, the Regius Professor of Medicine. In 2002, he published a monumental report “Genomics and World Health” for the World Health Organization, followed by a close partnership with the National Institutes of Health to form a world health initiative for hemoglobinopathies. In the last two years, he received two of the most prestigious awards in the United States: the Lasker-Koshland Special Achievement Award in Medical Sciences, and the 2011 Karl Landsteiner Memorial Award.