The Demographics of Thalassemia

Alpha thalassemia is a major public health issue throughout the world. Five percent of the world’s population are carriers for Alpha thalassemia. It is very common in California, as seen in the California Newborn Screening Program results.

Many people with Hemoglobin H may not know they have the disorder until they develop complications. California has adopted universal screening for Hemoglobin H and is the only state with such a policy. Listed below are the Hemoglobin H genotypes identified by the California Newborn Screening Program between 2006 and 2008. 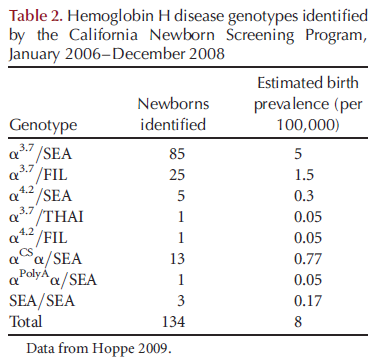