The Inheritance of Thalassemia 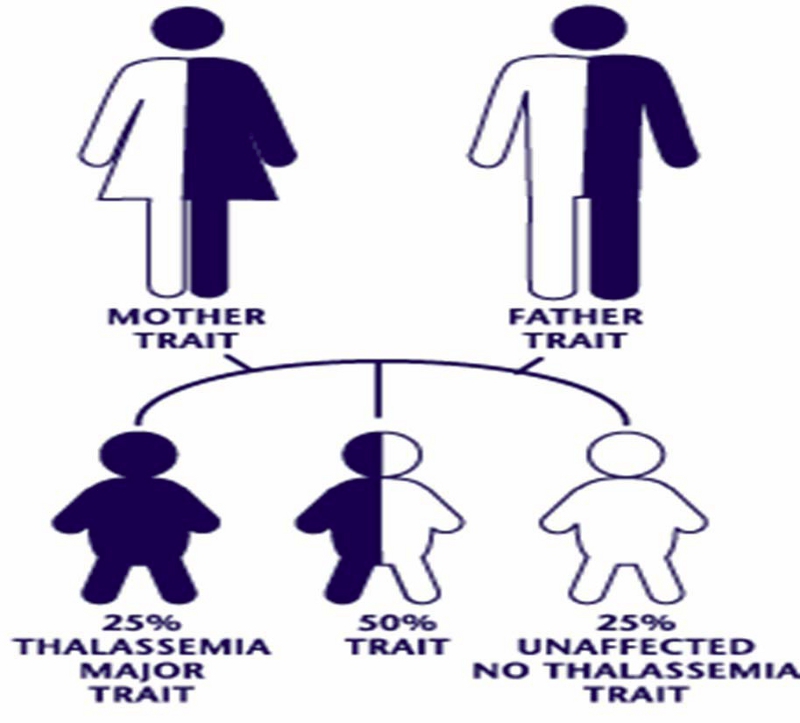 Below is a karyotype, a picture of all of an individual’s genetic information as seen through a microscope. Notice there are 22 pairs of numbered chromosomes (autosomes) and one pair of sex-determining chromosomes. Also notice that a male carries both an X- and a Y-chromosome, whereas a female has two X-chromosomes. Because a man can pass down either an X- or a Y-chromosome, he is the one who randomly determines the sex of the baby.

Half of a woman’s genetic information goes into each egg, including one chromosome 11 and one chromosome 16. The same is true in the formation of sperm. At conception, the total of 46 chromosomes is restored. Which chromosome 11 or 16 is passed down is determined randomly. There is nothing that a mother or father does (or does not do) to direct which chromosome, and therefore which allele, is transmitted to his or her children.

The thalassemias are a group of recessively inherited conditions. Recall that genes come in pairs. In recessive conditions, both members of the pair associated with the condition must be changed, or mutated. This is different from a dominant condition, in which only one copy of the gene need be changed in order to manifest symptoms.

In recessive conditions, a benign trait or carrier state can exist in which an individual has both a normal and a mutated copy of the gene. The term "normal" is a convention to simply describe the copy of the gene, called an allele, that is seen most often in the general population. The normal allele is able to compensate for the missing or altered function of the mutant allele. Therefore, the individual with trait does not have the symptoms seen in the disease. It is generally thought that each one of us carries 7-8 of these recessive traits, which would cause disease if present in a “double dose.”

It is not uncommon for a person with a recessive disease to be the first individual in his or her family to have the condition. Typically, this occurs when both parents are carriers of the trait. This is different from a dominantly inherited condition in which members of a family in several consecutive generations are affected.