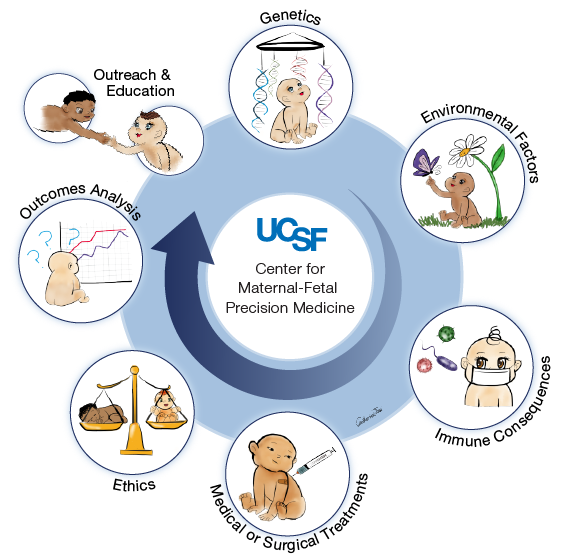 The Center for Maternal-Fetal Precision Medicine is a trans-disciplinary program designed to improve our understanding and treatment of patients with congenital anomalies and pregnancy complications. We aim to integrate resources and talent between scientists and clinicians to accelerate research and clinical trials of fetal and neonatal interventions, create stronger bridges between basic research and clinical applications, and improve maternal, fetal, and neonatal care.

Fetal Transplant Study
UCSF Benioff Children's Hospital Oakland and the Center for Maternal-Fetal Precision Medicine have begun enrollment for a clinical trial that will test the safety of combining in utero hematopoietic stem cell transplant with a fetal transfusion of red blood cells. This combination is aimed at treating and, possibly, curing Alpha Thalassemia Major, a blood disease that is often fatal in utero. This trial is the first of its kind in the world, and could also lead to treatments for other life-threatening blood diseases, such as sickle-cell anemia.
...read more

The UCSF Fetal Treatment Center and UCSF Benioff Children's Hospital Oakland Thalassemia Center have established the first multidisciplinary center for Alpha Thalassemia Major. The program is designed to address the complex diagnostic, prenatal, intrauterine, and perinatal management issues affecting a family with an Alpha Thalassemia Major pregnancy. Maternal complications of an Alpha thalassemia pregnancy are common and can be serious. Our perinatal program is designed to monitor these pregnancies in order to prevent or minimize these risks. Families at risk for an Alpha thalassemia pregnancy are confronted with significant medical, psychological, economic and ethical issues which are addressed by our multidisciplinary team. Fetal therapy, including intrauterine transfusion, is relatively safe when performed by experienced perinatologists, and dramatically improves the likelihood of fetal survival. Families undergo education concerning the risks and benefits of intervention. As more babies are being born with Alpha Thalassemia Major, updated information on the long-term prognosis and quality-of-life are shared with potential parents.

Hemoglobin Bart's (Hydrops Fetalis or Alpha Thalassemia Major) is a devastating, usually fatal disease. It is common in many ethnic groups, including China, Southeast Asia, the Philipines, Greece, Turkey, Cyprus, India, Sardinia, and many other parts of the world. In the first 8 weeks of gestation, embryonic hemoglobin effectively carries oxygen to the tissues. Alpha Thalassemia Major due to lack of Alpha chains, prevents the fetus from producing fetal hemoglobin and therefore, oxygen cannot be effectively delivered to the tissues. As the fetus becomes progressively anemic, massive enlargement of the liver and spleen occur in an unsuccessful attempt to produce more red cells. Eventually, the fetus develops heart failure, severe body edema, and intrauterine demise often follows.

Early detection of fetal anemia allows for family planning and the option for intrauterine intervention. Doppler ultrasound of the fetal cerebral artery circulation is a very sensitive and specific test for predicting anemia. In addition, measuring fetal blood flow and other fetal changes including placental thickness can detect Alpha Thalassemia Major by as early as 12 weeks of age, before the development of fetal and maternal complications. Serial prenatal ultrasonography starting by 14 weeks of gestation will detect the development of anemia and allow for intrauterine transfusions, which correct the fetal anemia and usually prevents fetal loss. Long-term follow-up of survivors of severe fetal anemia suggest that neurologic function is maintained and childhood quality of life appears good. Childhood follow-up studies at 5 years of age for Alpha Thalassemia Major and other pregnancies associated with severe fetal anemia are limited but very encouraging. Follow-up of approximately 30 children have normal neurocognitive and motor function, and almost all are attending standard school educational programs. Neurocognitive testing on 16 children who had hydrops fetalis and underwent intrauterine transfusion indicate normal IQ testing in most subscales.

Our team is also investigating the role of in utero transplantation for fetuses with Alpha thalassemia. The main advantage of this strategy is to take advantage of the unique fetal immune system so that the fetus could become tolerant to the transplanted cells. Such an approach may avoid the toxicity that is associated with routine bone marrow transplantation. Evidence from animal models supports the use of this strategy in select hematopoietic diseases and our team is investigating techniques to improve the success of in utero transplantation prior to initiating a clinical trial.

All hemoglobin (except for embryonic hemoglobin) consists of 4 globin chains, which always contain two Alpha Chains and two non-Alpha Chains. Fetal hemoglobin is made up of 2 Alpha chains and 2 gamma chains. Adult hemoglobin (Hemoglobin A) is made up of 2 Alpha and 2 Beta chains. This means that a mutation in the Alpha chain will affect all hemoglobin production after about 8 weeks of life. The Alpha globin chains are controlled by 4 Alpha globin genes, with 2 Alpha globin genes inherited from each parent. Alpha gene mapping can be obtained to determine the specific mutation. Alpha thalassemias can be categorized by the number of mutated genes.

• Silent Carrier: one mutation. Characterized by three functional genes that code for the production of Alpha globins. Outside the newborn period, it is not possible to make this diagnosis by conventional methods. These individuals have no abnormalities on their blood tests and are detected only by special tests, such as DNA analysis.

• Alpha Thalassemia Trait: two mutations. Up to 5% of the world's population has Alpha thalassemia trait. It is mild and may cause the red cell to be small in size, with slight anemia.

• Hemoglobin H disease: 3 mutations. It can cause moderate anemia and some medical problems.

There is marked variability in the intrauterine clinical course of Alpha Thalassemia Major due to different mutations. There are over 126 Alpha thalassemia mutations. The large mutations may affect the embryonic hemoglobin essential for survival in the first few months of life. These severe mutations result in early gestational miscarriage or abortion and may go undetected. Smaller mutations do not involve the embryonic gene and may result in fetal disease developing later in gestation. Most of these pregnancies are 3rd-trimester miscarriages, stillbirths and occasionally critically ill surviving newborns. While the severity of the Alpha globin mutation is the most major factor in disease severity, there are other important genetic mutations that influence the disease severity. Sometimes there are mutations on other parts of the chromosome that affect Alpha globin gene function. Occasionally, these non-Alpha-thalassemia mutations will cause a fetus with only 3 genes affected to clinically be as severe as a fetus with 4 affected genes. Additionally, there are non-genetic factors that may aggravate fetal anemia such as ABO/Rh incompatibility in the parents. There are increasing numbers of surviving Alpha thalassemia newborns being reported who have not been prenatally diagnosed. However, these surviving newborns usually have experienced severe fetal hypoxia due to anemia in the third trimester; they often have consequences including neurologic injury and developmental abnormalities such as skeletal malformations. The associated neurologic injury and developmental abnormalities are secondary to the severe anemia, since they are generally prevented by early intrauterine transfusion. Those who do survive the neonatal period continue to have chronic anemia and require monthly transfusion therapy and treatment for iron accumulation. Stem cell transplantation is now being successfully reported in some survivors.

Recommendations and Services for At-Risk Couples 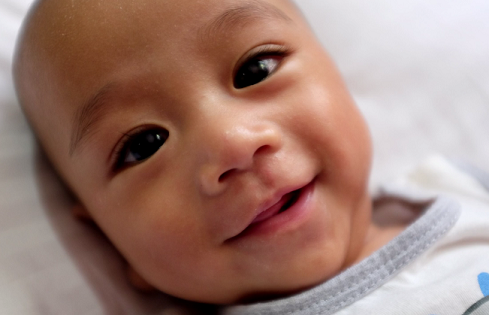 This is a video made by a wonderful family who understood the issues surrounding Alpha Thalassemia Major pregnancies who were committed to doing everything they could to help their child. It is a moving life story of their baby's first year and illustrates the family's challenges and successes. We are posting this with the family's permission because they want this information about Alpha Thalassemia Major to be available to the community.

If the mother has microcytosis without iron deficiency, DNA diagnosis of thalassemia is recommended. Sample Testing instructions can be found on the Hemoglobinopathy Laboratory web site.

When parents have Alpha thalassemia trait, DNA analysis of the fetus is required. Fetal tissue obtained by chorionic villus sampling early in the first trimester is indicated. This is usually performed at 10 to 12 weeks of gestation. Alternatively, cultured cells from amniotic fluid obtained by amniocentesis may be done at 15 weeks gestation. Non-invasive prenatal diagnosis is being developed utilizing purified fetal DNA from a simple maternal blood sample is being studied. This is a research test because of the problem of maternal DNA interfering with the fetal testing. 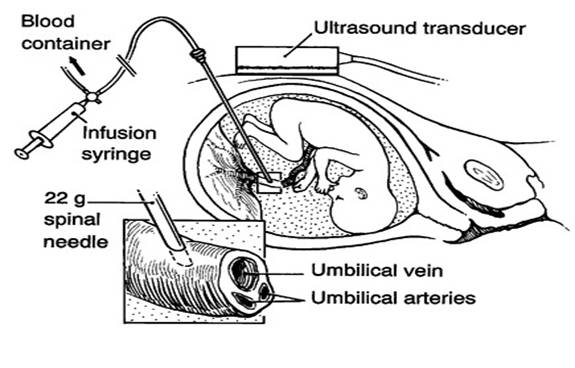 Doppler ultrasonography over the mother's abdomen can determine the blood flow in the cerebral arteries of the fetus. The blood flow rate strongly correlates with anemia in the fetus. Greater than 90% of cases of Alpha Thalassemia Major or a severe anemia can be detected safely with this Doppler technique. Middle cerebral artery measurements can be monitored after 16 weeks of gestation and reliably determine if severe fetal anemia exists.

Intrauterine transfusion is a relatively safe procedure when performed by perinatologists familiar with the technique. However, there are risks that include a 1% fetal death rate and 5% chance of usually mild bradycardia; overall, the serious complication rate is approximately 3%. Intrauterine transfusion and testing of the fetal blood can be done through several techniques. Access through the umbilical cord is commonly used. The sample is tested for severe anemia and the diagnosis of Alpha thalassemia. The degree of anemia and the appearance of the cells are usually immediately diagnostic. DNA testing is always indicated for 100% certainty. A fetal hemoglobin below 7 gm/dl is severe and consistent with Alpha Thalassemia Major. Following acquisition of the fetal sample, an intrauterine transfusion is performed. Fresh blood that is CMV-negative, leuko-depleted, washed and irradiated is used. The units are washed in order to increase the hemoglobin concentration. Serial transfusions are often necessary. The correction of the anemia usually results in a dramatic improvement in fetal function, and a correction of the cerebral blood flow rate. With appropriate intrauterine transfusion, almost 90% of these pregnancies result in a live birth.

The timing of the delivery is related to allowing the fetus to mature as much as possible. However, most fetal births of Alpha Thalassemia Major babies initially are unstable and may develop respiratory distress. Many may require temporary ventilation support in order to adjust to post-natal life. Despite the relatively high rate of transient neonatal problems, most of these babies fully recover. The fetal blood cells (Bart's hemoglobin) in Alpha Thalassemia Major that circulate in the newborn do not carry oxygen effectively. Therefore, an exchange transfusion at birth is often required. After the baby stabilizes in the neonatal period, s/he requires a monthly transfusion in order to sustain a healthy hemoglobin level. These transfusions can be given as an outpatient. Ongoing monitoring of Bart's hemoglobin is necessary to make sure it does not become prevalent. Transfusions suppress its production.

Once discharged, the babies are transfused close to their homes as an outpatient, indefinitely. After a year of age, medications to protect them from the excess iron found in blood are started.

Serious neuro-developmental impairment is found in 5% of these babies: this may include significant developmental delay, cerebral palsy, deafness, and rarely, blindness. While other children may have mild neurologic impairment, most function well and are mainstream in school. The degree of impairment is influenced by how severely affected the fetus was before intrauterine transfusion therapy was initiated. 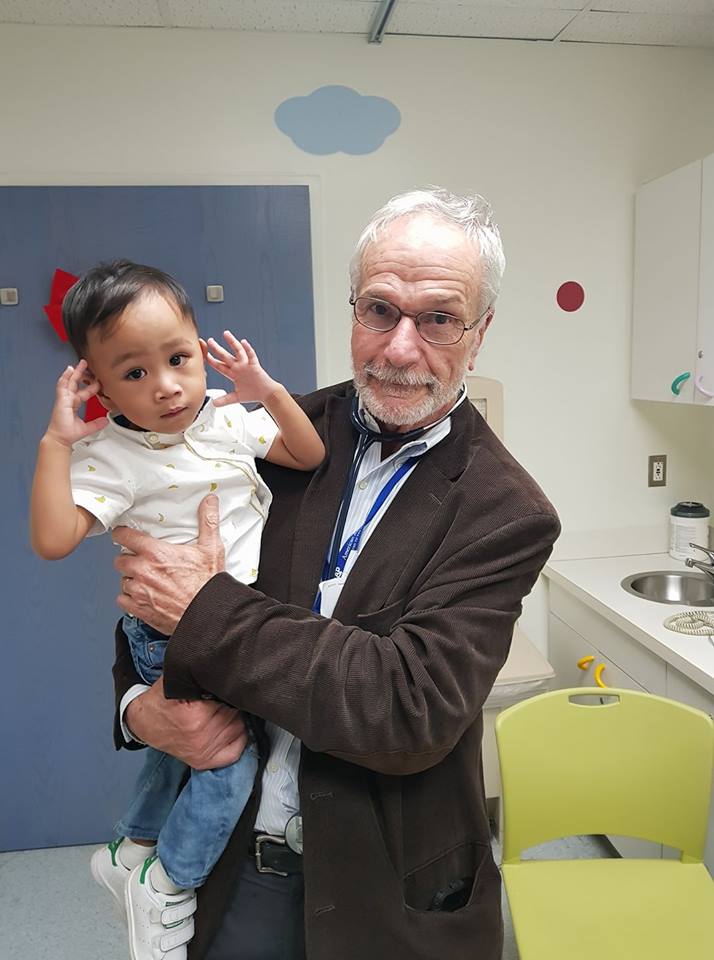 Gene therapy trials have now been initiated in thalassemia. In the near future, the Fetal Medicine Program and the Thalassemia Center are investigating the potential for a treatment utilizing in-utero gene therapy. While there are several obstacles to the success of such a program, its development is progressing.